Get fresh music recommendations delivered to your inbox every Friday.
We've updated our Terms of Use. You can review the changes here.

Goodbye To The Rank and File

by Casey Neill & The Norway Rats 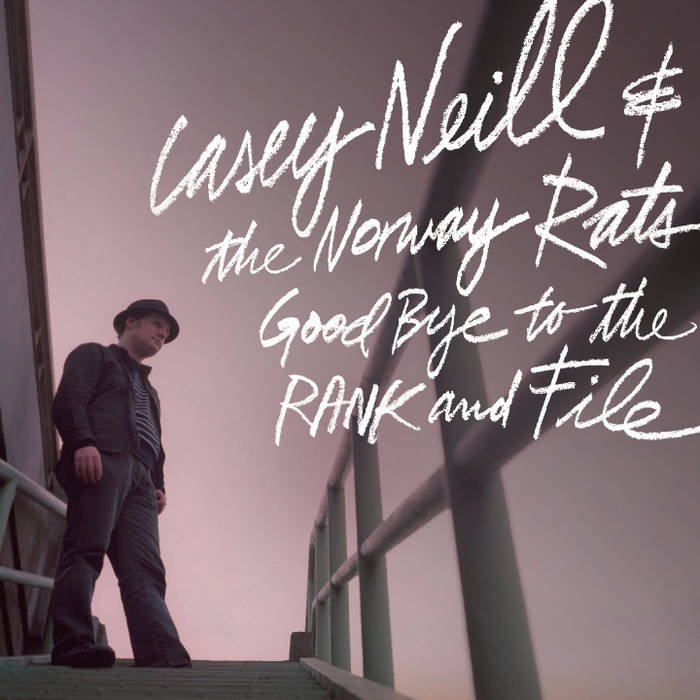 "The music itself is almost shockingly accomplished. Neill is a talented vocalist and his moody voice suits the feel of the songs perfectly, while the rest of the band fit together to make up the refined roots sound. In theme, this is an album that touches on love, loss, life and bitter defeat, all viewed through a distinctly Northwest American eye. The song writing belongs up with the classics of this or any genre. - Jenna Cosgrove, THE PUNK SITE

When the day is young, everything seems possible; the next waking hours can become anything you want them to be.  Casey Neill’s newest album, Goodbye to the Rank and File, is very much like that thought. It’s just bloody good, the storytelling, the diverse influences, the delivery, it all comes together to box your ears, but oh, you’ll like the bruises. Lyrically, this is the best album I’ve heard in a very long time, musically it is almost as good, Casey Neill has hit a grand slam with this album.
Aaron Binder, WORDBIRD

"Casey Neill’s latest record, Goodbye to the Rank and File, is just as much audio book as it is album, teeming with rich lyrics that paint the glory and gutter of a wanderer’s struggle. Backed by talented Rats like Jenny Conlee (the Decemberists, Black Prairie) and Chet Lyster (Lucinda Williams Band), Neill bellows pack the punch of white-capped seas, soaking the band’s big sky, prairie wind sound with a haunting graveness. It just may be Portland’s strongest brand of unfettered, contemporary roots rock."
- Mark Stock, WILLAMETTE WEEK

...the Norway Rats provide a celtic country rock backing and some very fine rockabilly guitar moments to Neill’s introspective, sometimes autobiographical tales of misery and redemption, cracked ceilings and brilliant mornings, despair and love, tales from the other side of the tracks given quite real depth and emotive power. We haven’t all quite been there but when we do arrive at the destinations described by the twelve songs on Rank And File we’ll know where we are, thanks to Neill’s eye for detail combined with his unflinching humanity. If I’d wanted to hear an album that encapsulated the barroom romanticism, neon lit glamour of a downtown Saturday night anywhere, an imaginatively vivid evocation of life lived not quite on the margins but lived to the full nonetheless, an album that had the grit of the very best Alt. Country and the unsentimental eye of a social document, and that might even inspire some actual jigging in its more upbeat moments, then I couldn’t have asked to hear a more completely realized work than Rank And File. - Jon Gordon, ADEQUACY.NET

“All Summer Glory” is a particularly remarkable track in that it’s pretty much a microcosm of everything you’ll feel listening to the record. It starts with fast minor chord strumming, with verses comprising pure 20-something defiance that shows off the band’s post-punk influences...with a soaring melody that sort of rips your heart out with it sudden beauty" -
DRIFTWOOD MUSIC

“Be it through raucous rockers, fragile acoustic ballads, ragged country, passionate bursts of punk fury or soulful touches of Irish folk, Neill's narrative talent and concern for real people's struggles stand out. (Neill) evokes an epic feel that fits perfectly with the implicit grandiosity of this emotional material, delivered with a raspy, affectionate voice that recalls Life's Rich Pageant-era Michael Stipe. The results are so evocative, you'll be tempted to steep further in these memories, the better to share Casey Neill's particular blend of personal and historical experience.” - SPLENDID eZine

Bandcamp Daily  your guide to the world of Bandcamp

Trevor de Brauw of RLYR and Pelican stops by for a chat, plus a tribute to the late Trevor Strnad